Though traces of a village from Neolithic times were discovered in Chablis, the town's real origins are to be found in Roman times. Chablis was named after the word "caplum", which means "ford" in Latin. The vineyards developed well in the 3rd century, thanks to the Roman Emperor Probus. Flowing gently through Chablis, the Serein River plays an important role as a climatic regulator, and helped to transport Chablis wines to the port of Auxerre, then to Paris and foreign countries, particularly to Belgium and England.

But the real expansion of the Chablis vineyard is due to the Cistercian Monks, the Abbey of Pontigny being quite close. At the end of the last century, phylloxera destroyed the whole vineyard, which explains the recent introduction of the Chardonnay varietal. Since the seventies, the vineyard has grown spectacularly, mainly because of the improvement of measures to fight against the spring frost. 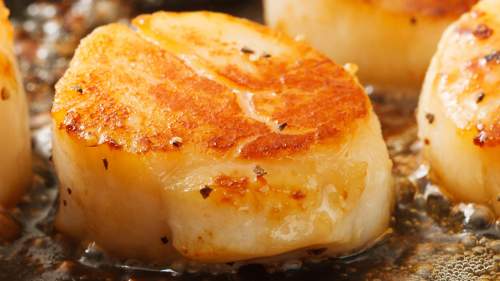 Seared Scallops with Leeks and Ginger